If you’re like me, it takes some time before you explore all the bells and whistles of your software. The reason for this is simply the fact that you have the software for a purpose, you use it for that purpose and you just run with it, rather than fiddling about with it. This is the case with my MAMP install.

Now and then I would be coding something and would forget a semicolon, dollar sign, etc and when I would view the site I was looking at in a browser I would get an annoying blank white screen. 99% of the time, I could find the error by just doing a quick scan of my recent changes. Yesterday, I couldn’t. So I had to open up MAMP and look up where the log file was to take a look. Found it, fixed it, closed the log.

Once again, it was problem/solution scenario (ya, I’m boring you, I know). I didn’t even bother to look at a checkbox that was right there, its beautiful name is “Display”. I only noticed it this morning because I thought to myself, “Why the eff doesn’t MAMP write errors to the screen?” Turns out, it does. I checked off the Display box, restarted the server, purposely broke my code and refreshed my browser…ah, happiness. 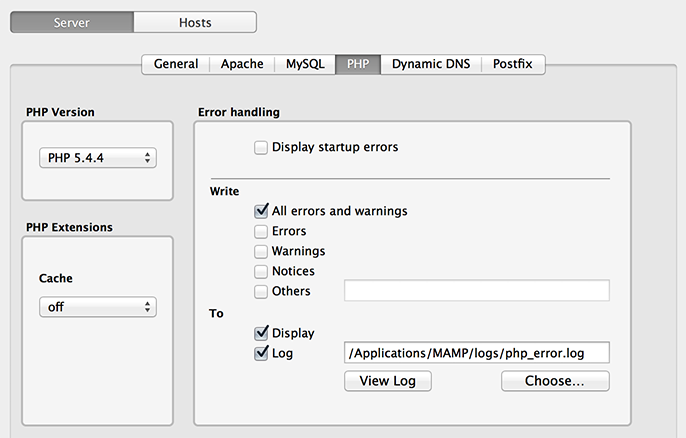 When working on a WordPress project, I have always done a one off theme for all of my clients. I either create the graphical layout, or it is sent to me and I do the slicing and begin coding from scratch. In a recent cooperative project where the client was the lead and also a developer, he wanted to go with a parent theme and just create a child them.

Even though it wasn’t new to me, it was. Stay with me for a moment… I have worked with child themes previously, but I have never created one. It wasn’t difficult, however, with this one, it took a little more effort than normal. With child themes, I believe, most developers just toss in their own custom CSS to change the layout, colors, etc and call it a day. It wasn’t that easy with this one due to some custom post types needing to be displayed, which calls for custom templates.

It was definitely a learning experience, and I see the added value of having a parent/child theme development process. Parent themes allow for upgrading of the parent theme (bug fixes, new tech, etc) without losing the customization of the child theme. A parent theme also gives you a foundation to start with, your own personal framework.

With all of that being said, I believe I am going to develop my own personal parent theme to use with projects. This will allow me to bring in things I find myself repeating over and over again, and will also speed up the development process. It’s a win win.

Hooray for me, got a new design up. Dove into this one head first using SASS, along with an additional framework/mixin called Bourbon.

For those not in the know, SASS is a parallel to CSS. It’s actually a language that allows you to use variables, nesting and function like elements called mixins. Typically the SASS will need to be run through a pre-processor to compile it into plain old CSS. If that doesn’t put a twinkle in your eye, then you need to be shown what happens when the SASS is processed to get it, just like I did.

I wrote in SASS, with a hint of Burbon:

SASS was then translated to CSS:

Get it now? That’s just the tip of the iceberg. If you code CSS by hand, I strongly suggest checking out SASS, as it can not only speed up development, but can also make it much easier to use reusable code.

Do you stick with what you know? Do you try to mimic or use the new trends out there? Do you try to make the next “hot” item? Honestly, I have no clue. I am trying to figure this all out for my own personal project.

One thing is certain, I am going to use the Twitter Bootstrap for my basic structure. One major reason is the cross browser compatibility that it offers, with its responsive attributes following a close second.

A basic design already exists, it’s simple, clean and gosh darn it, I like it. Now just to finish it up between other items.

Recently had a project that required IE6 compatibility,  it was annoying, but wasn’t all that difficult. There are hundreds of hacks out there to target all kinds of browser flaws, most of said flaws have been ironed out, but IE6 is just a big problem. I did my research on it, and apparently in August of this year there were still 6.7% of users using it. That’s 67 out of 1000 visitors, which counts for something. My question is, is that developers testing in IE6 being counted as users? A few screen shots of my ordeal are below.

First,  how it’s supposed to look:

As you can see, things became just slightly distorted in different versions of IE. This, believe it or not, was easily sorted out without hacks. I used conditional comments that only target IE, these are available from Microsoft at: http://msdn.microsoft.com/en-us/library/ms537512%28VS.85%29.aspx . Or, you can check out these examples, they are placed in the head of the page:

As you can see, you put your main CSS file first, then you add in specific CSS files for each version of IE. Only IE sees these, and they do not invalidate your page.

In my experience, probably only about 50% of developers know about this. I say that because a lot have no clue they should be targeting IE6, they only test in latest browser versions, and the others still use hacks. I personally own a hack book that’s around 200 pages, and not once are conditional comments mentioned, probably because it would reduce the book to about 30 or so pages.

In the end, IE6 displayed the page better than IE7, believe it or not.